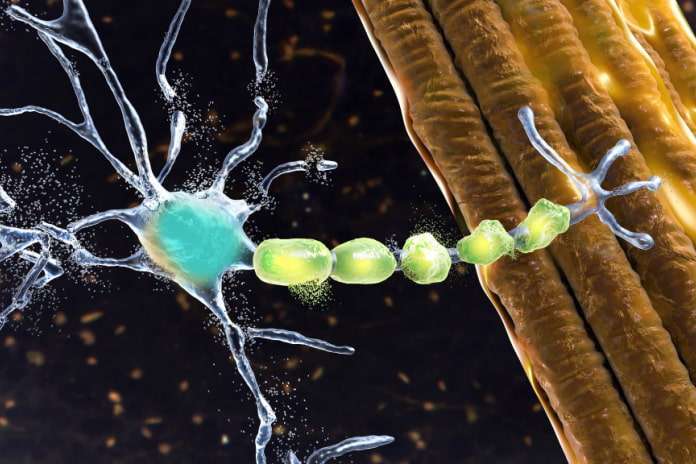 This world-class repository recovers, characterizes, stores, and distributes brain and other tissues for the study of developmental, neurological, and movement disorders and to ultimately develop new treatments for these conditions. The donation will be provided by the Blazeman Foundation for ALS, created in memory of Jonathan S. Blais who passed away in 2007 at age 35 from ALS.

“We are profoundly grateful to Bob and Mary Ann Blais for this donation that will serve to greatly accelerate expansion of the Brain and Tissue Bank ALS collection support ALS research,” said Thomas Blanchard, PhD, Associate Professor of Pediatrics at UMSOM and Director of the UM Brain and Tissue Bank. “This resource will allow us to perform outreach to ALS investigators in support of translational research. It will also support an annual ALS seminar in honor of Jon Blais via the Department of Neurology.”

Jon Blais was an avid triathlete who used his final years advocating for ALS awareness and research, ultimately making history for his incredible completion of the Ironman competition in Hawaii in 2005. Before Jon died, he pre-registered to donate his brain and tissues to the UM Brain and Tissue Bank to help advance research on ALS. Jon also founded the Blazeman Foundation for ALS to increase awareness of ALS and to raise money to support research for the treatment and ultimate cure of ALS.

Jon’s parents, Bob and Mary Ann Blais, have continued Jon’s mission through the Blazeman Foundation for ALS. Through the Foundation, they have worked with the University of Maryland Brain and Tissue Bank to create an ALS tissue collection to make neurologic samples available to ALS researchers nationwide.

The UM Brain and Tissue Bank’s (UMBTB) overarching mission is to collect and characterize both healthy and diseased brain tissue from deceased donors. It is one of six biorepositories that are part of the NeuroBioBank, funded by the National Institutes of Health (NIH). Recently, the banks within the NeuroBioBank have been charged with developing a collection of brains to be used to create a cell atlas of the human brain that characterize all brain cell types at high resolution. The atlases can be widely used throughout the research community to help further understanding of neurologic disorders and develop new treatments.

Dr. Blanchard and his colleagues have published numerous research findings using samples from the UMBTB. A recent study published in February examined brain tissue from those who died of COVID-19 and found that the SARS-CoV-2 virus that causes the infection can induce or enhance certain Alzheimer’s-like abnormalities; these brains displayed evidence of beta-amyloid plaque formation, neuroinflammation, and cell death.

“We are looking to increase the diversity of post-mortem donors at UMBTB,” said Dr. Blanchard. “We are targeting donor recruitment of minority populations, who are under-represented in our biobank, to help us better understand the full array of genetic differences and ensure that research findings are broadly applicable.”

More than ten years ago, the NIH began the Genotype-Tissue Expression consortium. It obtained high-quality tissue samples from almost 1,000 adult postmortem donors and used this tissue as a source to generate gene expression data to facilitate research on how genomic variation impacts complex traits and disease. The NIH is now funding a follow-up study on post-mortem pediatric donor tissues to study the genetics that influence the development of many of the tissues in the body. The UMBTB shares a grant with the National Disease Research Institute and Children’s Hospital of Philadelphia to serve as the bio-sample procurement center in order to support the study of gene expression in the various tissues collected from these donors.

Competing in triathlons for 20 years, Jon Blais always wanted to compete in an Ironman – especially in Hawaii. On October 15, 2005, only 5 months after being diagnosed, he became the only individual with ALS to complete an Ironman, finishing in 16:28:56. He crossed the finish line by log-rolling over it, and since then, the “log roll” has been graciously performed by countless athletes as a symbol of hope, and more importantly, as a means of raising awareness for ALS.

“Jon Blais is a hero, and his parents have kept his name alive through their valiant efforts to advance research into the origins and treatment of ALS,” said Mark T. Gladwin, MD, Executive Vice President for Medical Affairs, UM Baltimore, and the John Z. and Akiko K. Bowers Distinguished Professor and Dean, University of Maryland School of Medicine. “We will be eternally grateful to them for their support of our Biobank.”