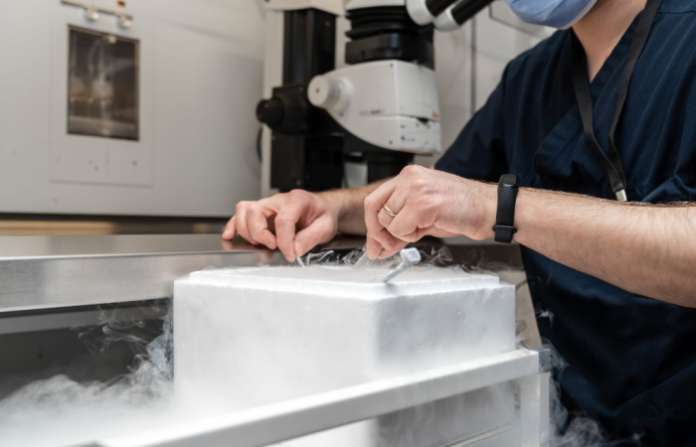 A new technique for freezing cells for use in biomedical research, based on polymer technology developed at the University of Warwick, has been validated in study, paving the way for faster results for scientists in their research.

Cells attached as monolayers (grown on plastic) are used in drug discovery, toxicology, biomaterials and in all fundamental research. However, they cannot be cryopreserved whilst attached to this plastic, creating a major bottleneck.

University of Warwick technology now allows cells to be stored frozen attached to the plastic, and are ‘ready to use’ direct from the freezer removing a significant bottleneck in the drug discovery process.

The ability to freeze and bank cells as monolayers has taken a major step forward, solving a long-term problem in the paper Assay-Ready Cryopreserved Cell Monolayers Enabled by Macromolecular Cryoprotectants published by the University of Warwick’s Department of Chemistry and Warwick Medical School, working with the biotech Cryologyx Ltd. Crucial to this is polymer technology developed over the last decade at the University of Warwick.

When discovering new drugs, or understanding fundamental cell biology, most cells are studied whilst attached to tissue culture plastic (adherent cells). Ideally, researchers would just take cells out of the freezer, thaw them, and then use them. However, current cryopreservation technologies only allow cells to be stored in suspension – researchers must thaw, and then grow, the cells for 7 -14 days before use. This is inefficient and means researchers and industry spend more time growing the cells, than studying them.

The GibsonGroup, working with Cryologyx, have solved this long-standing problem using their macromolecular cryoprotectant technology – CryoShield™. The cryoprotectants protects the cells against cold stress, meaning the cells can be taken from the freezer, thawed and in less than 24 hours rather than the two weeks currently required, then are ready to use.

This impressive data represents a step-change in cryopreservation and will facilitate the discovery of new drugs, identify toxic compounds, screen for viruses and much more. This work has been supported by a European Research Council Proof of Concept grant awarded to Professor Matthew Gibson, to translate their team’s research from the lab to industry, as well as by InnovateUK, the Biotechnology and Biological Sciences Research Council and Cryologyx Ltd.

Professor Matthew Gibson who holds a joint appointment between the Department of Chemistry and Warwick Medical School at the University of Warwick and is a co-founder of Cryologyx comments: “Cryopreservation is fundamental to so much modern bioscience and medicine but using current technologies, once you thaw the cells you can spend two weeks working before you actually get your data. We have a mission to make the process easier – so you can decide to do an experiment on Monday, and have the data by the end of Tuesday. This would save costs and time in drug discovery.”

“Our core technology are macromolecular cryoprotectants – polymers which protect the cells from cold stress. We are really excited to be able to do the science, but also translate this into our spin-out company who are developing the assay-ready cells.”

Dr. Thomas Congdon who is CEO and co-founder of Cryologyx says: “CryoLogyx works directly with cell biologists, in university research groups, start-ups and SMEs, to large biotech and pharma companies. Across the board they are excited at the potential that cryopreserved cell monolayers have for accelerating research and revolutionising how they work and what they can achieve in the lab.”

“We are incredibly proud to collaborate on the research being carried out at University of Warwick. This work shows that three of the most used cell lines in the world can be made truly assay-ready. It is a great achievement with the potential to save researchers incalculable hours in lab and reduces the cost of drug discovery programmes by tens, if not hundreds, of millions of pounds.”

Be The Match® And Gift Of Life® Marrow Registry To Open...